by Mark Waid and Adurey Mok

ARCHIE VOL. 6 is the next installment in the collection of the historic ARCHIE series relaunch, featuring the talents of comics superstars Mark Waid, Ian Flynn, Audrey Mok and more. This series is true to the spirit and characters that all Archie fans know and love while reinvigorating its spirit and humor through the talents of some of the most acclaimed creators in the comic book industry.

It all comes down to this! The Riverdale gang--held hostage by Cheryl Blossom's father! Reggie--at last paying for his crimes! And when all is said and done, Riverdale is turned upside down once more!

Mark Waid, Alabama native and current Los Angeles resident, has written stories for every major comic book publisher, and his seminal graphic novel, Kingdom Come, for DC Comics, is one of the best-selling graphic novels of all time..

He is best known for his work on various DC Comics titles, most notably the Superman-related titles and The Power of Shazam! with Captain Marvel and the Marvel Family. Krause, a graduate of the University of Minnesota, currently works as a freelance illustrator in Minnesota.

Be the first to review Archie Vol. 6. 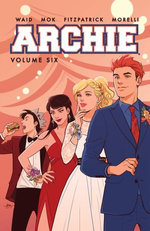 by Mark Waid and Adurey Mok