Asgardians Of The Galaxy Vol. 1

Collecting Asgardians of the Galaxy #1-5. Spinning out of INFINITY WARS comes an epic space opera! Angela, Thor’s half-sister. The hotheaded Valkyrie — and Annabelle Riggs, the human who shares her form. Skurge the Executioner, freshly returned from Hel. Throg, the mighty frog of thunder. Kevin Masterson, the boy who took his father’s mace to become the hero Thunderstrike. And the Destroyer, the Asgardian armor built to take down Celestials — its current occupant unknown. A team of murderers, assassins, heroes — and frogs — assembles to save the universe from a weapon even Thor himself would fear to fight! Thanos’ deadly granddaughter, Nebula, is out to rule the galaxy — and not even the dead will stand in her way! Allied uneasily with Loki and targeted by the Nova Corps, can the Asgardians possibly triumph over Nebula’s armada?

Cullen grew up in rural North Carolina, but now lives in the St. Louis area with his wife Cindy and his son Jackson. His noir/horror comic (and first collaboration with Brian Hurtt), The Damned, was published in 2007 by Oni Press. The follow-up, The Damned: Prodigal Sons, was released in 2008.

In addition to The Sixth Gun, his current projects include Crooked Hills, a middle reader horror prose series from Evileye Books; The Tooth, an original graphic novel from Oni Press; and various work for Marvel and DC. Somewhere along the way, Cullen founded Undaunted Press and edited the critically acclaimed small press horror magazine, Whispers from the Shattered Forum.

All writers must pay their dues, and Cullen has worked various odd jobs, including Alien Autopsy Specialist, Rodeo Clown, Professional Wrestler Manager, and Sasquatch Wrangler. And, yes, he has fought for his life against mountain lions and he did perform on stage as the World's Youngest Hypnotist. Buy him a drink sometime, and he'll tell you all about it.

Be the first to review Asgardians Of The Galaxy Vol. 1. 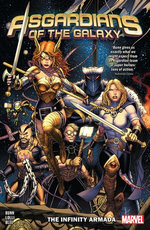 Asgardians Of The Galaxy Vol. 1