“God! Has it come to this?” Meet Grace, white-haired, with dementia, being admitted to the daunting asylum with an unwelcome introduction from the student nurse. Then Percy, the crystal radio buff, with depression. Here is Harry, the Japanese ex-POW, whose bath-time is a re-living of battles fought and Walter, with the dodgy and less than faithful, girl-friend. What about Tom, who is getting secret signs from both the Newscaster on the BBC as well as the landlady of the local pub, or Betty who won’t fit in the coffin, and needs a bit of encouragement? But also meet the very novice student nurse fearfully working on nights, standing there being strangled, not knowing what to do, or trying to come to grips on his first day on the ward with shaving a corpse. Learn about what goes on in the long asylum corridor & how to survive the laws of the asylum jungle. Information comes from the unlikeliest of sources, the Social Club hard drinkers. Asylum Bound is a wild weird walk through the experiences of a student nurse entering the unknown world of the mental "asylum" of the 1970s. It is a bizarre world, a world of terrible extremes. Within this odd place there are Hogarthian characters of varying chaotic hues, some aggressive, some sad, some disturbed and some institutionalised, both patients and staff. It is in this strange world that understanding develops on the origins of psychiatry and its terrible treatments, including lobotomies, E.C.T., insulin shock and even aversion therapy for underwear snatchers. Learning starts about schizophrenia and bipolar disorder, new and frightening conditions that had new and frightening treatments and outcomes. But the asylum is coming to the end of any usefulness it might ever once have had. The patients are leaving, the staff are changing, and, thank God, the abuses are declining. It is a different world from anything experienced before. It is a very new world. It is a life-changing revelation. What started as a novelty, progressed to fascination and was to end in tragedy. It was the start of a long psychiatric nursing career. It is, sadly, all true.

Be the first to review Asylum Bound. 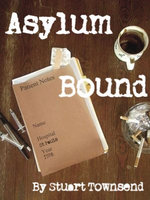 Biography: historical Medical sociology
Hold on while we process your request.