by Nicola Marsh and Miranda Lee

Her Deal With The Devil – Nicola Marsh

Patrick Fourde was once famed for the trail of broken hearts and rumpled bedsheets he left behind him. Now the fashion house CEO is determined to make his name known for the right reasons. First challenge? Getting Sapphire Seaborn, Melbourne's Queen of Jewellery, onside.

Sapphie has sacrificed everything for her jewellery business and very nearly lost it all. She hates that to rescue it she needs to work alongside her nemesis – Patrick!

It was supposed to be business only, but Sapphie quickly realises that when you make a deal with a devil this scorching, someone's going to get burned…

Harry Wilde was one of Sydney's most eligible tycoons, but Tanya, an ordinary girl from the outback, fascinated him. Yet he tells this country girl that she's the niece of the recently deceased CEO of Femme Fatale. She's next in line to inherit the famous lingerie company!

Tanya needed Harry's help to become a businesswoman. However, she realised that Harry saw her as a challenge: he aimed to groom her, and seduce her...but would he get his way?

After leaving her convent school, Miranda Lee briefly studied the cello before moving to Sydney, where she embraced the emerging world of computers.

Her career as a programmer ended after she married, had three daughters and bought a small acreage in a semi-rural community. She yearned to find a creative career from which she could earn money.

When her sister suggested writing romances, it seemed like a good idea. She could do it at home, and it might even be fun! She never looked back.

Be the first to review Australian Romance Duo/Her Deal With The Devil/The Playboy's Virg. 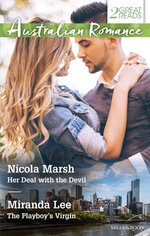 by Nicola Marsh and Miranda Lee