In those days Balthasar, whom the Greeks called Saracin, reigned in Ethiopia. He was black, but comely of countenance. He had a simple soul and a generous heart The third year of his reign, which was the twenty-second of his age, he left his dominions on a visit to Balkis, Queen of Sheba. The mage Sembobitis and the eunuch Menkera accompanied him. He had in his train seventy-five camels bearing cinnamon, myrrh, gold dust, and elephants' tusks. As they rode, Sembobitis instructed him in the influences of the planets, as well as in the virtues of precious stones, and Menkera sang to him canticles from the sacred mysteries.

Be the first to review Balthasar. 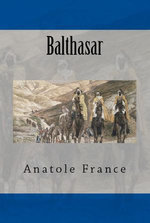