Since then the middle-class girl from Bolton and her scandalous lifestyle has barely been out of the tabloid press in the past three years.

Now in her first explosive confessional book "Bang to Writes" Jennifer lifts the lid on her days as a high class escort and recounts her liaisons with many famous Premiership players.

The novel is a true autobiography chartering her life from a young naive 'Daddy's girl' into one of the most famous hookers in Britain, mixed up in a world of cocaine, cash and sexually charged clients.

The brunette beauty describes in detail how she was invited to the Manchester United Christmas party by the team's 'Mr. Fixits' and how one of her fellow call girls was given £50,000 to terminate a baby born to one of the wealthiest men in football.

Jennifer holds no bars when it comes to sharing her entire journey including a magical night in London with a famous actor, how she eventually falls in love with a notorious criminal and decides to 'go straight' eventually giving up her life of prostitution and partying.

For a while life was sweet for Jennifer, until her secret affair with Wayne Rooney became known to the national press and reporters hounded her and her friends until she was forced into selling her side of the story, a decision which broke the heart of her loving, supportive parents.

Shocking, juicy and full of provocative stories about a lifestyle that has to be read to be believed.

You will not want to put this one down!

Be the first to review Bang To Writes. 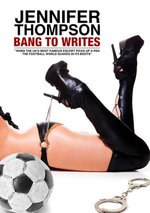