by Dave Hutchinson, Alberto M. Caliani,  Sarah Singleton and others

Every city has its own rhythm, its own beat and character; none more so than Barcelona. To commemorate the 2016 European Science Fiction Convention being held in this historic city, NewCon Press invited many of Spain’s top SF and fantasy authors to join those from Britain, France, and Canada to write stories that cast the city in a whole new light. Original stories from the likes of multiple award-winning Elia Barceló (whose work has been translated into eighteen languages), and Spain’s most decorated genre author Rodolfo Martínez, sit alongside tales from two-times Nebula winner Aliette de Bodard, Campbell Award-winner Lisa Tuttle, multiple award-winning author Ian Watson and more.

Be the first to review Barcelona Tales. 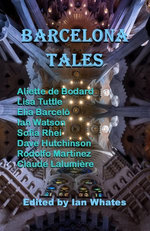 by Dave Hutchinson, Alberto M. Caliani,  Sarah Singleton and others