by Douglas Lorain and Mike White

This is the second book in a series of detailed guidebooks covering all the best “life-list” backpacking vacations in the spectacular backcountry of the American West. This new volume specifically covers the best such adventures in the states of Utah, Arizona, and New Mexico. Every conceivable aspect of trip planning is covered in the guide, including maps and descriptions of the trail, where to locate the nearest airport, other area attractions that shouldn’t be missed, and guide services that are available. A noteworthy feature of the book is the individual vignettes that give insight into the historical significance of many of the trails. Also unique are the interesting and humorous personal accounts that the authors share from their personal experiences hiking these routes. Backpackers will find a wide range of outstanding trips, from high mountain adventures to some of the world’s best lower-elevation canyon hikes. Best Backpacking Trips in Utah, Arizona, and New Mexico provides an extensive choice of terrific expeditions.

Mike White has had dogs most of his life, including a giveaway mongrel when he was a teenager, a puppy who was going to be drowned, and his current huntaway, Cooper, who features throughout How to Walk a Dog.

They've been wonderful mates, loyal company and frequently disobedient. Some have broken his bones; all have broken his heart when they've gone. White is one of New Zealand's best-known journalists and a senior writer at North & South magazine where he has won more than 20 national media awards, including the Wolfson Fellowship to Cambridge University.

In 2013 he wrote the best-selling true crime book Who Killed Scott Guy? He lives in Wellington with his partner, Nikki, and they walk Cooper along the coast, through the bush and at the city's dog parks.

Be the first to review Best Backpacking Trips in Utah. 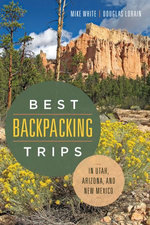 by Douglas Lorain and Mike White