Beyond the Mountains of Madness

Antarctica... a frozen wasteland of penguins, blinding ice and snow, and blizzards to kill the unprepared in minutes. But it is an ancient land, with ancient secrets, mysteries that humanity is only beginning to glimpse. HP Lovecraft introduced the world to the terrifying reality of this lonely continent in his famous novella, At the Mountains of Madness, and now a new team of intrepid authors follows in his footsteps. New dimensions of horror will send chills up your spine, from the pens of Ken Asamatsu, Glynn Owen Barrass, Pierre Comtois, Laurence J. Cornford, Cody Goodfellow, C.J. Henderson, Willie Meikle, Edward Morris, William Patrick Murray, Joe Pulver, Mark Rainey, Peter Rawlik, and Brian M. Sammons, with a special guest appearance by Weird Tales legend John Martin Leahy and an introduction by Robert M. Price.

Be the first to review Beyond the Mountains of Madness. 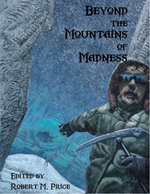 Beyond the Mountains of Madness