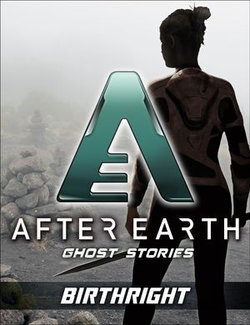 On a distant planet called Nova Prime, the United Ranger Corps defends the galaxy’s remaining humans from an alien race known as the Skrel and their genetically engineered predators, the Ursa. But when one Ranger discovers the secret to destroying the enemy, she faces a decision no one should have to make.

Ghost Stories: Birthright is the third of six ebook short stories that lead up to the events of After Earth, the epic science fiction adventure film directed by M. Night Shyamalan and starring Jaden Smith and Will Smith.

After watching her husband die in a horrible accident, Mallory McGuiness has only one option: keep working. Rangers have duties. Responsibilities. Mallory is justthat – an ordinary Ranger – until she vanquishes one of the nearly invincible Ursaand realises she is much, much more. Unfortunately, the power to save the human race from extinction comes riddled with questions, conflicts, and no guarantees, only impossible choices. Frustrated by her suddenly tame assignments, Mallory considers jumping the chain of command, taking her grievance directly to Commanding General Cypher Raige. But she stifles the impulse long enough to tangle with destiny on a desert mission where nothing’s supposed to go wrong . . . and everything does.

Peter David is a professional writer.

He has had several novels published but has also written scripts in Hollywood and comics. He lives in the USA.

Be the first to review Birthright - After Earth: Ghost Stories (Short Story).