This is the 7th episode in the second season of The Witch Who Came In From The Cold, a 13-episode serial from Serial Box Publishing. This episode written by Cassandra Rose Clarke.

As the Ice’s plans for their Hosts take form, Josh’s mission for the CIA causes concern. Tanya begins to realize she may have underestimated Zerena – or overestimated herself. Van and Nadia fail to keep their distance. Sasha makes moves in the shadows.

Be the first to review Bishop Takes Queen (The Witch Who Came in from the Cold Season 2 Episode 7). 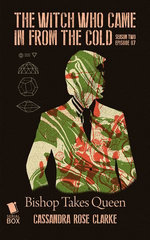