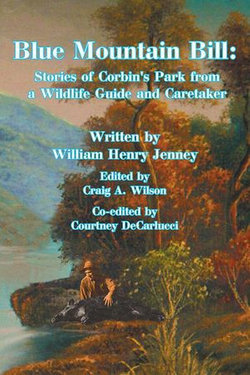 Meet Old Uncle Bill He is a kind, friendly, sincere old gentleman who lives in a little house on a hill in Croydon, New Hampshire. He insists his home is Corbins Park and dearly treasures his associations and experiences there. To be with him, hear him talk, and absorb some of his homely sympathetic philosophy inspires in one a greater longing for the plain simpler things in life. Author, William Henry Jenney, wrote the stories presented in this book, as the character Blue Mountain Bill (aka Uncle Bill Barton). Each story is based on his experiences as a young man working as a wildlife guide and caretaker during the early 1900s at Corbin's Park, a New Hampshire hunting reserve. To one who is privileged to read these stories there comes a realization that in the profound appreciation of the beauty of the natural setting, in the keen understanding of the different forms of wild life which inhabited the Park, and in the clever delineation of the character of Old Uncle Bill Barton, about whom all these stories center, is the reflection of the soul and character of William Henry Jenney himself. "Uncle Bill Barton is the type of solid old New England character that Bill Jenney knew so well as a boy - a type that began to pass out of existence a generation or so ago, and which unfortunately we will probably never see again." ~ William Brewster, Headmaster of the Kimball Union Academy, 1935-1952

Short stories History of the Americas

Be the first to review Blue Mountain Bill:.

by William Henry Jenney, Craig A. Wilson and Courtney DeCarlucci