Adam Cooper can’t do relationships, and has two failed engagements to prove it. His work as a lawyer, a shark in the courtroom, brings out a side of him that women don’t like or understand.

With his last breakup, he was left so disillusioned he not only swore off relationships but even took an extended break from the work he loves.

And then Holly Monroe, arrives in Johannesburg.

She has been on her own since she was fifteen. With a past she’s trying to forget and a future she’s afraid to hope for, Adam and his big, loving family are exactly what she cannot allow herself to trust. She is determined to maintain her defences and rely only on herself. It’s safer that way.

The more Adam gets to know Holly, the more he wants to break his no relationship rule. But his killer instinct that’s been honed for cross-examining witnesses in the courtroom rears its head in their romance. He can’t shake the feeling she’s keeping secrets from him. And Adam knows that secrets in a relationship lead only to one verdict.

Be the first to review Breaking Her Defenses. 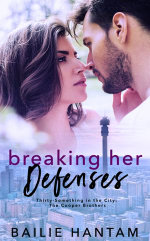 Adult & contemporary romance Sagas Fiction
Hold on while we process your request.