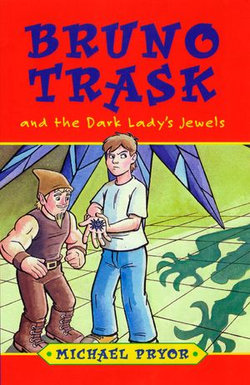 In the fantastical world of Michael Pryor’s new novel, humans live alongside elves, dwarves, werewolves and ogres. Bruno Trask is a human boy with a very boring job: he has to parade around the local shopping mall dressed as Roger, the Smiley Dragon. One day at the mall a fabulous collection of enchanted jewellery is on display. It is presided over by the Dark Lady, the most famous, rich and influential Dark Elf in the world. Just as she’s unveiling the main attraction—an old family heirloom called the Black Star—Bruno accidentally knocks it out of her hand in a spectacular collision. It soars high into the air and Bruno, again accidentally, puts out his hand and catches it. In a flash of light, the Black Star merges with his hand and becomes embedded in the middle of his palm. Suddenly, Bruno is the centre of attention. The Dark Lady wants her Black Star back and she’ll do anything to get it. With two of her bodyguard ogres after him, Bruno very quickly finds himself on the run. Will Bruno stay out of the Dark Lady’s clutches? And what is the secret behind the Black Star?

Be the first to review Bruno Trask and the Dark Lady's Jewels.