Calvin for the 21st Century is an edited compilation of the stimulating addresses given at the Puritan Reformed Theological Seminary’s annual conference in August 2009, at Grand Rapids, Michigan. The book contains a wealth of information and practical applications about how to use Calvin’s thought in our challenging day. Topics include Calvin on preaching Christ from the Old Testament, missions, the church, Scripture, the Spirit’s work, redemption, ethics, believers’ benefits, the early church, reprobation, marriage, and reforming the church. A highlight is Ligon Duncan’s chapter on “The Resurgence of Calvinism in America.” The book concludes with a summary chapter by the editor, Joel Beeke, who expounds twelve reasons Calvin is important for us today. Additional writers include Jerry Bilkes, Michael Haykin, Nelson Kloosterman, David Murray, Joseph Pipa, Neil Pronk, Donald Sinnema, Derek Thomas, and Cornel Venema.

Be the first to review Calvin for Today. 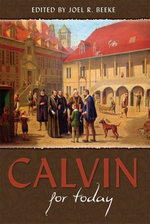