THE BOOK THAT PREDICTED E-READERS

Ernst Theodor Amadeus Hoffmann (1776-1822) is known to the world primarily as the author of The Nutcracker, a Christmas tale immortalized as a famous classical ballet. It is less known that E. T. A. Hoffmann is also a pioneer of magic realism, whose works influenced generations of speculative fiction authors. Born Ernst Theodor Wilhelm, Hoffman changed his middle name to Amadeus as a tribute to his favorite composer, Wolfgang Amadeus Mozart.

E. T. A. Hoffmann's tales heralded major discoveries of the modern days, and are considered among the major influences in literature and culture.

"Choosing the Bride", a novella written at the break of the 19th century, predicted the existence of e-reader – a small volume one can always carry in a pocket, which could turn into any book you want. Like other discoveries foretold by speculative fiction authors, people dreamed of making this one a reality for a long time, until it finally found its way into ordinary households and has become an essential part of our lives.

Step into the mythical world of Hoffmann's old Berlin, and experience the enchantment of his magical tale…

Be the first to review Choosing the Bride. 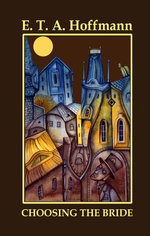 Classic fiction Fantasy
Hold on while we process your request.