by Sam J. Miller, Neil Clarke,  John Barnes and others

Clarkesworld is a Hugo and World Fantasy Award-winning science fiction and fantasy magazine. Each month we bring you a mix of fiction (new and classic works), articles, interviews and art.

Sam J. Miller is a writer and a community organiser. His debut novel The Art of Starving, was called 'Funny, haunting, beautiful, relentless and powerful...a classic in the making' by Book Riot, and received starred reviews from Kirkus, Booklist and Publisher's Weekly.

His stories have been nominated for the Nebula, World Fantasy and Theodore Sturgeon Awards and have appeared in over a dozen 'year's best' anthologies. He's a graduate of the Clarion Science Fiction & Fantasy Writers Workshop, and a winner of the Shirley Jackson Award. He lives in New York City.

Neil Clarke is the editor of Clarkesworld and Forever Magazine; owner of Wyrm Publishing; and a five-time Hugo Award Nominee for Best Editor (short form).

He currently lives in New Jersey with his wife and two children.

Lavie Tidhar (The Bookman; A Man Lies Dreaming; The Violent Century) is the author of the breakout Campbell and Neukom award-winning novel Central Station, which has been translated into ten languages.

He has also received the British Science Fiction, Neukom Literary, and World Fantasy awards. Tidhar was born in Israel, grew up on a kibbutz, has lived in south Africa, Laos, and Vanuatu, and currently resides in London.

Be the first to review Clarkesworld Magazine Issue 142. 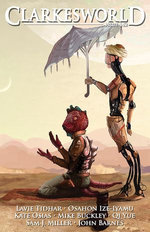 by Sam J. Miller, Neil Clarke,  John Barnes and others

Science fiction Fantasy
Hold on while we process your request.