Creative Evolution provides an alternate explanation for Darwin's mechanism of evolution, suggesting that evolution is motivated by an élan vital, a "vital impetus" that can also be understood as humanity's natural creative impulse. The book was very popular in the early decades of the twentieth century, before the Neodarwinian synthesis was developed.[citation needed]

The book also develops concepts of time (offered in Bergson's earlier work) which significantly influenced modernist writers and thinkers such as Marcel Proust. For example, Bergson's term "duration" refers to a more individual, subjective experience of time, as opposed to mathematical, objectively measurable "clock time." In Creative Evolution, Bergson suggests that the experience of time as "duration" can best be understood through creative intuition, not through intellect.

Be the first to review Creative Evolution. 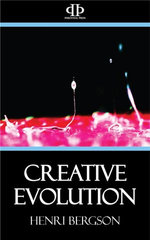 Philosophy Biology Evolution
Hold on while we process your request.