A great victory has been won, but the war is far from over.

The Boy-King now needs his bride…and his heir.

Only the young officers of the Watch can stop him. But they have their own battles to face and their own demons to fight. And those inner demons are not proving so easy to control as they are lured to the blood-soaked moors of Culloden for the final confrontation.

The dead are rising. A new darkness is fast approaching. Victory is close…but will the hands of Martin and Sean be too bloodied for them to grasp it?

The conclusion of the critically-acclaimed Watchers series!

Praise for the Watchers Trilogy!

Be the first to review Culloden. 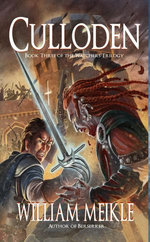