by William Gibson, Mark Teppo,  Bruce Sterling and others

before the world wide web,

before Alexa, Cortana, and Siri,

before the computer in your pocket was more powerful than the one that sent astronauts to the moon,

And science fiction was never the same.

Cyberpunk writers—serious, smart, and courageous in the face of change—exposed the naiveté of a society rushing headlong into technological unknowns. Technology could not save us, they argued, and it might in fact ruin us.

Now, thirty years after The Movement party-crashed the scene, the cyberpunk reality has largely come to be.

The future they imagined is here.

Welcome to your cyberpunk world.

Jonathan Lethem was born in New York and attended Bennington College. He is the author of seven novels including Fortress of Solitude and The Feral Detective. Motherless Brooklyn was named Novel of the Year by Esquire and won the National Book Critics Circle Award and the Salon Book Award, as well as the Macallan Crime Writers Association Gold Dagger. He has also written two short story collections, a novella and a collection of essays, edited The Vintage Book of Amnesia, guest-edited The Year's Best Music Writing 2002, and was the founding fiction editor of Fence magazine. His writings have appeared in the New Yorker, Rolling Stone, McSweeney's and many other periodicals. He lives in Brooklyn, New York.

Kim Stanley Robinson is a New York Times bestseller and winner of the Hugo, Nebula and Locus awards. He is the author of more than twenty books, including the bestselling Mars trilogy, 2312, Aurora and New York 2140. In 2008 he was named a 'Hero of the Environment' by Time magazine, and he works with the Sierra Nevada research institute. He lives in Davis, California.

Paul Tremblay is a multiple Bram Stoker Award finalist and author of the crime novels The Little Sleep and No Sleep Till Wonderland.

He has served as the president of the board of directors of the Shirley Jackson Awards, and his essays and short fiction have appeared in the Los Angeles Times and numerous year's best anthologies.

He has a master's degree in mathematics and lives outside Boston with his wife and two children.

Since embarking on her career as a fiction writer in 1987, her Hugo and Nebula Award-nominated short stories have appeared in such magazines as Omni, The Magazine of Fantasy and Science Fiction, and Asimov's Science Fiction Magazine as well as numerous anthologies.

Her first collection, Patterns, was honoured the Locus Award in 1990, and she won the Arthur C. Clarke Award in 1992 and 1995 for her novels Synners and Fools. Pat Cadigan moved to the UK in 1996 and now lives in London.

Greg Bear is one of the world's leading hard SF authors. A multiple Hugo and Nebula award winner, he sold his first short story, at the age of fifteen, to Robert Lowndes's Famous Science Fiction.

His novels Blood Music and Eon are both Gollancz Masterworks. A full-time writer, he lives in Washington with his family.

Be the first to review Cyberpunk. 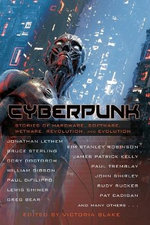 by William Gibson, Mark Teppo,  Bruce Sterling and others

Contemporary fiction Short stories
Hold on while we process your request.