From the moment Dakota Mason realizes he wants Tawny Stoker, this obsessive need rises inside of him. He is possessive, jealous, and territorial of her. He wants to tear down anything that stands in his way of having her as his.

Tawny appears like she lives on the wild side, but she is really innocent. The one guy she desires, who she wants to be her first, only sees her as the girl he grew up with. Dakota, a member of The Brothers of Menace MC, is just as hardcore as any Grizzly club member she knows, and just as powerful.

When the two of them finally get together it’s explosive. Dakota can’t control his desire where she is concerned. Tawny consumes him, drives him crazy with lust, and he can’t stop until she is fully his. Dakota will destroy anyone that thinks they can take Tawny from him.

Be the first to review Dakota's Claim. 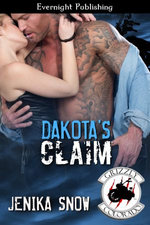