Husband and wife Derek and Kat are nervously preparing to go to a restaurant for dinner with her boss, Don Maclean. Neither knows the reason for this meeting, but they’re both hoping to make the best of it.

As the night wears on and the couple start to unwind, Don makes his power play – an offer that shocks the couple. All they need do is give in to this alpha male’s demands.

I promised that I would be a good wife. That was before I met him…

Naomi is heading to a workplace party with her husband, Dennis. He’s a big-shot at a major corporation, while she’s a kept woman – unsatisfied and constantly searching for excitement and passion on her own. Despite this, she’s trying to be a better wife and stay faithful to her husband.

But when she meets a tall, dark, handsome stranger, she finds her faithfulness wavering. With their instant chemistry and obvious attraction, it’s only a matter of time before Naomi gives in to this man…

Oliver and Layla appear to be your normal everyday couple. At least, that’s what Oliver believes, until he makes a shocking discovery about his wife and the life she leads behind his back.

As Oliver delves deeper into the mysteries surrounding his wife, he finds himself torn between two equally upsetting options. Is this the end of their marriage, or the start of something totally new and unexpected?

Before I Walk the Aisle

Candice is just a few short hours away from getting married and things are not going well. Between problems at the venue and her own self-doubt, she’s starting to panic that this wedding is some kind of crazy mistake. She needs to talk to someone, anyone, who can understand how she’s feeling.

Short on options and tight on time, Candice calls the only person she can turn to – her big, black ex-boyfriend, Nick. He’ll be able to make her feel better, won’t he? And she can definitely trust herself around him…

My wife and I play a game. Once a week, she goes on a date with a hot guy. Then she comes home afterwards and tells me all about her wicked thoughts and fantasies and the things she wanted to do with him. It's a good thing we have together. But tonight, my wife is going to change the rules. What happens when the fantasy becomes reality?

This collection contains previously published material. All stories can be purchased separately.

Be the first to review Darker Passions: Interracial Love. 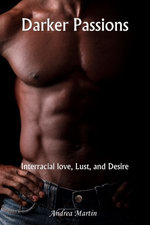