'Death of a Salesman' in Beijing

In 1983 Arthur Miller was invited to direct Death of a Salesman at the Beijing People's Theatre, with Chinese actors. This was an entirely new experience for Miller and for the Chinese company, most of whom had never even heard of 'life insurance' or 'installment payments'. Miller had forty-eight days of rehearsals in which to direct his play and, while there, he kept a diary.

This book tells the fascinating story of Miller's time in China and the paradoxes of directing a tragedy about American capitalism in a Communist country, and features photographs throughout by Inge Morath.

In this edition, Miller's diary is given a contemporary context as the production and process is investigated against the backdrop of twenty-first century China and its theatre, through a new introduction by Claire Conceison, Professor of Theatre Studies at Duke University.

Be the first to review 'Death of a Salesman' in Beijing. 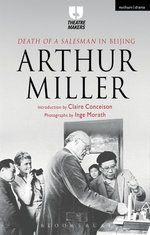 'Death of a Salesman' in Beijing