by Catherine Mann, Cat Schield,  Sarah M. Anderson and others

From feuding families, rancher Daniel Clayton and Alexis Slade have been star-crossed lovers for years. But now the stakes are higher - Alexis ended it even though she's pregnant! When they're stranded together in paradise, it may be their last chance to to finally make things right...

Zoe Alston is ready to make good on her revenge pact, but wealthy Charleston businessman Ryan Dailey defies everything she once believed about him. As their chemistry heats up the sultry Southern nights, will her secrets destroy the most unexpected alliance of all?

When CEO Ward Benally catches back-from-the-dead Breanna Steele snooping, he'll do anything to protect the company - even convince her to play the role of his girlfriend. But when the sparks between them are real, will she end up in his bed...and in his heart?

Flynn Parker and Sabrina Douglas are best friends, coworkers and temporary roommates. He's becoming the hardened businessman he never wanted to be, but her plans to run interference did not include an accidental kiss that ignites the heat that has simmered between them for years...

Aloof, rich, gorgeous - that's Dr. Robert Wyatt. The only person he connects with is bartender Jeannie Kaufman. But when Jeannie leaves her job to care for her infant niece, he'll offer her everything she wants just to bring her back into his life...except for his heart.

When critic Jeff Harper's career implodes due to scandal, he does what he vowed never to do - return to Plunder Cove. There, he'll have his family's new hotel - if he marries for stability...and avoids the temptation of the gorgeous chef vying to be his hotel's next star.

Joss Wood wrote her first book at the age of eight and has never really stopped. Her passion for putting black letters on a white screen is only matched by her love of books and travelling (especially to the wild places of Southern Africa) and, possibly, by her hatred of ironing and making school lunches. Joss was a finalist in the Voice of Africa/Essentials magazine short story writing competition in 2010 and placed third in 2011. It was through this competition that her first book was brought to the notice of the Mills & Boon editors.

Joss has a background in business and marketing. When she's not writing or being a hands-on mum, Joss, fueled by coffee, works for a nonprofit organization to promote the local economic development and the collective business interests of the area where she resides. Her hobbies include coaching her young daughter's field hockey team, meeting her friends for a before-work cappuccino and an after-work cup of tea, and reading, reading, reading.

She is happiest with a rucksack on her back and an airplane ticket in her hand and has been fortunate enough to indulge her passion for travel by visiting many countries within Southern Africa, Europe and America. Joss lives in a rural town in the province of Kwa-Zulu Natal, South Africa, in an area surrounded by wild-game farms and stunning mountains. It is not unusual for her to see rhinoceroses and giraffes, antelope and zebras while driving to have tea with her mother in a neighbouring town.

Joss lives with her husband, son and daughter - and their pets - happily and chaotically, surrounded by books, family and friends. 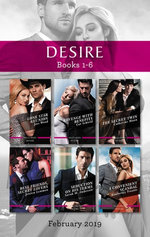 by Catherine Mann, Cat Schield,  Sarah M. Anderson and others