Jakob, a bear shifter and member of the Grizzly MC, is at a point where his life has no meaning. The darkness and loneliness slowly consume every part of him. In order to find that spark again, he became reckless, acting out and being even more dangerous than ever before.

Saya is instantly drawn to the bear shifter she sees fighting bare-knuckled and dirty. He’s handsome in a brutal way, but also seems angry at the world. But the attraction between them is undeniable.

She sees the aggressive, possessive side of Jakob, the side that will take down anyone that tries to hurt her. He’s deadly and menacing, and is power all wrapped in one dangerous grizzly shifter.

When Jakob is with Saya he feels there is meaning to his life. Looking at her, being with her, gives him that high he desires. He can’t let her walk away, no matter what. Making her see that she is meant for him, that she is his in all ways, is Jakob’s main goal now. He won’t fail at it.

Be the first to review Devil May Care. 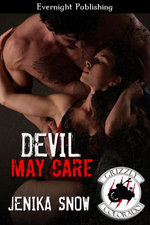