Discourse on the Method of Rightly Conducting One's Reason and of Seeking Truth in the Sciences: With 17 Illustrations and a Free Online Audio Link

The Discourse on the Method is one of the most influential works in the history of modern philosophy, and important to the evolution of natural sciences.

This Book is best known as the source of the famous quotation: Cogito Ergo Sum – I Think, Therefore I Am.

It is a method which gives a solid platform from which all modern natural sciences could evolve. With this work, the idea of scepticism was revived from the ancients such as Sextus Empiricus and modified to account for a truth that Descartes found to be incontrovertible. Descartes started his line of reasoning by doubting everything, so as to assess the world from a fresh perspective, clear of any preconceived notions.

This book is unabridged (unedited) and the story appears as it was first published in 1637.

The audio link will only work on Kobo's iOS and Android apps.

Be the first to review Discourse on the Method of Rightly Conducting One's Reason and of Seeking Truth in the Sciences: With 17 Illustrations and a Free Online Audio Link. 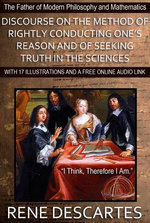 Discourse on the Method of Rightly Conducting One's Reason and of Seeking Truth in the Sciences: With 17 Illustrations and a Free Online Audio Link