DISCOURSE ON THE METHOD

DISCOURSE ON THE METHOD OF RIGHTLY CONDUCTING THE REASON,

AND SEEKING TRUTH IN THE SCIENCES.

Philosopher and mathematician René Descartes is regarded as the father of modern philosophy for defining a starting point for existence, “I think; therefore I am.”

The Discourse itself is meant to serve as a preface for these three essays, but it has since far surpassed them in reputation. While the essays are now rarely read, the Discourse itself has endured. The Discourse is intended to introduce the scientific method that Descartes has invented and to explain how his views came about and why he has been so hesitant to publish them, while the essays are meant to serve as evidence of the fruits of his labor. The Discourse does not just give us insight into Descartes's philosophy and his method; it also gives us insight into the intellectual climate of his day.

Be the first to review DISCOURSE ON THE METHOD. 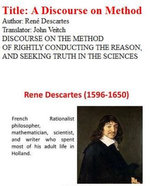 DISCOURSE ON THE METHOD

Philosophy Philosophy Complementary therapies
Hold on while we process your request.