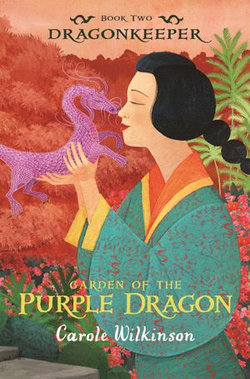 Dragonkeeper 2: Garden of the Purple Dragon

Ancient China, Han Dynasty. Ping thinks she is safe hiding in the shadow of the Tai Shan mountains. Here she struggles to care for Kai, the baby dragon she is responsible for. But even in her remote mountain hideout, Ping’s enemies find her. It is Kai they want. Who can Ping trust? It is impossible to distinguish friend from foe. The easy road beckons. Will they find sanctuary in the Garden of the Purple Dragon? Has the time come for Ping to embrace her true destiny?

Garden of the Purple Dragon is the second novel in the internationally bestselling and award-winning Dragonkeeper series from Australian author Carole Wilkinson. This gripping junior fiction fantasy is the perfect read for secondary school age children. Continue the story with the other books in the series: Dragonkeeper (Book 1), Dragon Moon (Book 3) and Blood Brothers (Book 4). Carole can be found online at: www.carolewilkinson.com.au

“Carole Wilkinson’s Dragonkeeper enchanted readers and critics worldwide and now she returns with the riveting sequel Garden of the Purple Dragon.” — Australian Books

“The plot is thoughtful and intricate, the characters skilfully drawn, and the prose as strong and sinuous as a dragon’s tail.” — Bookseller+Publisher magazine

“I was riveted by the magical adventures, beautifully told, of a nameless Chinese slave girl.” — Katharine England, Australian Book Review

“An enchanting blend of fantasy and history.” — The Age

“A journey ... is the essence of this outstanding novel ...It is a story that informs as it delights and leaves the reader with a yearning to know more.” — The Children’s Book Council of Australia, Judges’ Report

“... an ambitious novel, marrying ancient Chinese history and culture with magic and fantasy ... the sights, smells and tastes of this fantastic ancient China are fully realised.” — Australian Bookseller and Publisher

“Enchanting and fascinating ... something worth celebrating.” — Kate Fewster, Viewpoint

“... proof that the fantasy genre is still working its magic.” — Jodie Minus, The Weekend Australian

“Wilkinson writes with elegant simplicity and her tale acquires the force of fable. Its appeal is broad: complex enough for adults yet accessible to younger readers.” — The Saturday Age

Be the first to review Dragonkeeper 2: Garden of the Purple Dragon.

Dragonkeeper 2: Garden of the Purple Dragon