I hate to be the bearer of bad news but you can’t learn cartooning, and it can’t be taught.’

And so begins Oslo Davis’ illustrated book on how to draw gag cartoons. Talk about shoot yourself in the foot! But he’s kidding, kind of. There are reasons why your terrible cartoons are not funny, and Oslo is very happy to point them out. He’s also prepared to give you some advice, for what it’s worth, using examples selected from more than twenty years’ drawing for newspapers and magazines worldwide.

Drawing Funny is a how-to guide for people who might never draw a cartoon in their life but always read the cartoons first in the New Yorker and want to know how it’s done.

Oslo Davis is a widely published illustrator, artist and cartoonist. Oslo draws regularly for the Age newspaper and his work has appeared in the New York Times, the Guardian and online for SBS. He has also drawn for the Golden Plains music festival, the National Gallery of Victoria, Readings, Triple R FM and the Wheeler Centre, among many others. Oslo's books have covered topics ranging from Donald Trump, Henry Lawson, Asian mothers and scenes of angst-ridden daily life you can colour in.

Be the first to review Drawing Funny. 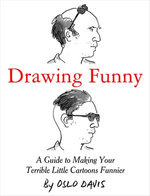