Dreams of lost humanity? A Marxist analysis of 'Do Androids Dream of Electric Sheep?' by Philip K. Dick

Seminar paper from the year 2016 in the subject English - Literature, Works, grade: A+, , course: Literary History and Theory, language: English, abstract: Published in 1968 'Do Androids Dream of Electric Sheep?' by Philip K. Dick, the novel is set in a post-apocalyptic near-future America, which is falling apart, after a nuclear war called World War Terminus. Animals are almost extinct and keeping and owning animals have become an obsession for the remaining society. The worst thing a human can do is to harm an animal or to feel nothing at the idea of harming an animal. Thus caring for an animal has become symbol of one's humanity. However, because genuine animals are extremely expensive very few people can afford them and so most people are forced towards the much cheaper electric animals to keep up the pretence. To own a real animal is a sign of distinction and prestige. Before the story's beginning Deckard owned a genuine sheep, but it died, and Deckard had to replace it with an electric one. Deckard's electric sheep leaves him discontent as he yearns for the prestige that would come with the ownership of a real animal. The novel is arguably as influential and relevant today as when it came out. Its social commentary and critique of a twenty-first century America in the grip of soul-crushing hyper-capitalism can be said to be poignant still. The works of Philip K. Dick and, in particular, Do Androids Dream has attracted a small army of scholars and theorist who have applied everything from psychoanalytical criticism to postmodernism. However, a Marxist criticism has not been applied to Do Androids Dream so far. Such a reading is the focus of this paper, as I find that there are several reference to Marxist theory. Throughout the novel, Dick provides a profound social commentary through the vision of a near-future dystopian society. Dick vividly demonstrates how consumerism and capitalism can create a society loaded with socialist elements, even in a world that has suffered nuclear war. Through Deckard who contemplates his place in society via his disdain of his electric sheep, Dick forces the reader to consider the importance of material possessions and how they can affect social status. One would assume that material things would have less significance in a world that has suffered a nuclear holocaust, however, Do Androids Dream shows the opposite; namely, a scenario where one's possessions in society are of the utmost importance. To illustrate how a dystopian society would still hold material possessions in such high regard, Dick embeds numerous Marxist elements into his work as h

Be the first to review Dreams of lost humanity? A Marxist analysis of 'Do Androids Dream of Electric Sheep?' by Philip K. Dick. 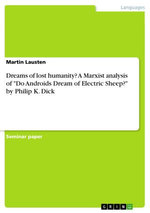 Dreams of lost humanity? A Marxist analysis of 'Do Androids Dream of Electric Sheep?' by Philip K. Dick