Earth and Salt, Fire and Mercury (The Witch Who Came in from the Cold Season 2 Episode 4)

This is the 4th episode in the second season of The Witch Who Came In From The Cold, a 13-episode serial from Serial Box Publishing. This episode written by Cassandra Rose Clarke.

Big magic is in motion as the Flame attempt to capture the freed Elements, and Zerena seeks to impress her old mentor. Tanya and Gabe team up to chase leads (and check up on a certain creature of clay). Sparks fly in the boxing ring when Nadia faces a newcomer.

Be the first to review Earth and Salt. 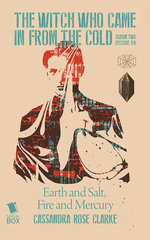 Earth and Salt, Fire and Mercury (The Witch Who Came in from the Cold Season 2 Episode 4)