This collection includes: Books and Habits from the Lectures of Lafcadio Hearn, Chita: A Memory of Last Island, Glimpses of an Unfamiliar Japan First Series, Glimpses of an Unfamiliar Japan Second Series, In Ghostly Japan, Japan: An Attempt at Interpretation, Kokoro, Kwaidan: Stories and Studies of Strange Things, Some Chinese Ghosts, The Romance of the Milky Way and Other Studies and Stories, and Two Years in the French West Indies. According to Wikipedia: "Patrick Lafcadio Hearn (27 June 1850 – 26 September 1904), also known as Koizumi Yakum after gaining Japanese citizenship, was an author, best known for his books about Japan. He is especially well-known for his collections of Japanese legends and ghost stories, such as Kwaidan: Stories and Studies of Strange Things... The Japanese director Masaki Kobayashi adapted four Hearn tales into his 1965 film, Kwaidan. Some of his stories have been adapted by Ping Chong into his trademark puppet theatre, including the 1999 Kwaidan and the 2002 OBON: Tales of Moonlight and Rain... Hearn was a major translator of the short stories of Guy de Maupassant. In Ian Fleming's 1964 novel You Only Live Twice, James Bond retorts to his nemesis Blofeld's comment of "Have you ever heard the Japanese expression kirisute gomen?" with "Spare me the Lafcadio Hearn, Blofeld."

Be the first to review Eleven Books. 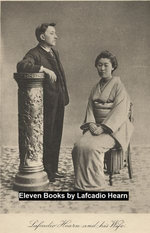