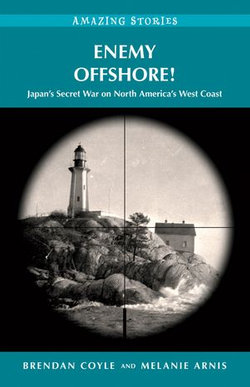 by Melanie Arnis and Brendan Coyle

On June 20, 1942, the lighthouse at Estevan Point on Vancouver Island was shelled by the Japanese submarine I-26. It was the first enemy attack on Canadian soil since the War of 1812. But this was only one incident in the incredible and little-known Japanese campaign to terrorize North America’s west coast and mount an invasion through the Aleutian Islands.

Enemy Offshore is a dramatic, comprehensive narrative of the events that unfolded as Japan brought the Second World War to North American shores. Submarines—Japan’s formidable I-boats—stalked the West Coast, attacking ships and shore stations. A Japanese aircraft-carrier force attacked Alaska twice, grabbing a footing in North America and launching a bloody conflict in the Aleutians. The Japanese bombed an Oregon forest in an eccentric plan to start mass fires and desperately launched thousands of bomb-laden balloons against Canada and the United States.

Here are also the stories of ordinary citizens—fishermen, Natives and wilderness warriors who allied with the military in the extraordinary but largely unknown war on the West Coast.

Be the first to review Enemy Offshore!. 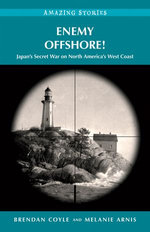 by Melanie Arnis and Brendan Coyle

Second World War Military history History of the Americas Asian history Local history
Hold on while we process your request.