In her book, Escarpment: Fibonacci poetry, Virginia Gow has applied the Fibonacci sequence of numbers to her poetry by counting the syllables in the words to determine the length of the lines.

The subsequent patterns make for a visually appealing book, quite aside from the pleasures of Virginia's poetry.

Leonardo Pisano Bigollo, who was also known as Fibonacci, was a brilliant Italian mathematician who lived in the Middle Ages from c. 1170 – c. 1250.

Fibonacci is credited with introducing the Hindu/Arabic numerical systems to the West as he saw that system superior to the system of Roman numerals. His book Liber Abaci (Book of Calculation) explained the system to western mathematicians. The Fibonacci sequence was named after him as he used it as an example in his writings by explaining the numerical reproduction of rabbits in an ideal situation.

In the Fibonacci sequence of numbers, each number is the sum of the previous two numbers:

Be the first to review Escarpment: Fibonacci poetry. 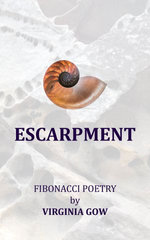 Poetry anthologies (various poets) Poetry
Hold on while we process your request.