In 'Expectations', when George, a seemingly virtuous, well-born and well-educated man, is murdered, his wife reflects on their life together. She married George for love despite knowing he only wanted her fortune. Now he is dead, she no longer has to resemble the psychologically disturbed Miss Haversham.

In 'Lizzie's Lover' a poetically-minded man woos his lover with quotes of verse. He is so obsessed with poetry that he determines to bring the words to life, regardless of the fatal consequences.

In 'Shreds and Slivers' an aggrieved man plots his deadly revenge with sinister cheer. This chilling tale will make you think twice the next time you're buying dinner.

In 'The Carer' nosy neighbour Angela looks after people's houses when they're away. Sometimes she likes to go through their possessions, searching their drawers to uncover their secrets... Until she uncovers a real life skeleton in a closet.

In 'Unacceptable Levels' a smoker has tried, and failed, to quit. When he's outside, he smokes to keep the mosquitoes away. When he gets mosquito bites, he can't sleep so he smokes some more, caught in a vicious psychological cycle.

Part of the Storycuts series, these five short stories were previously published in Blood Lines, a collection of murder mysteries and crimes thrillers.

Be the first to review Expectations / Lizzie's Lover / Shreds and Slivers / The Carer / Unacceptable Levels (Storycuts). 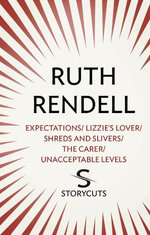