by Alexandra Grunberg, Steve Cotteril,  Fiction Vortex and others

Fiction Vortex publishes science fiction and fantasy short stories for the discerning reader, if by "discerning" you mean someone who likes solid plots, great characters, and fascinating technologies and cultures. This issue includes all the short stories that appeared on FictionVortex.com during August 2013. 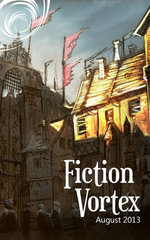 by Alexandra Grunberg, Steve Cotteril,  Fiction Vortex and others