by Jason Norton, Fiction Vortex,  R.W.W. Greene and others

We have conclusive proof in this issue that the May issue was more than just a fluke because we have yet another month's worth of fantastic stories to deliver. This issue has some great surprises, too. Fiction Vortex publishes science fiction and fantasy. All stories in this issue appeared on FictionVortex.com during June 2013. 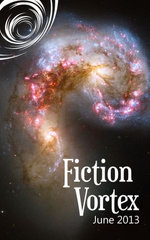 by Jason Norton, Fiction Vortex,  R.W.W. Greene and others