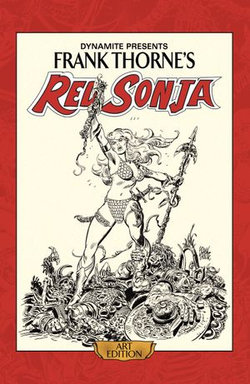 Celebrate the seminal work of legendary fantasy illustrator Frank Thorne with this gorgeous hardcover collection, presenting for the first time the actual storyboard artwork from his complete 1976 run of swords-and-sorcery icon Red Sonja appearances in the Marvel Feature comic book series. Scanned in high-resolution color and printed at original size, Frank Thorne's Red Sonja Art Edition preserves every detail of the artist's meticulous skill and hard work, while simultaneously presenting a complete storyline for the enjoyment of longtime She-Devil fans all in HD!!!

Bruce Jones, a former editor of Autosport magazine, is one of the most respected commentators and reporters on the motor racing scene around the world.

He has written numerous books, including the best-selling annual Formula 1 Grand Prix Guide (the 20th edition was published in 2016), Formula One: The Illustrated History, The Treasures of Formula One, Formula One Circuits from Above and The ITV Sport Complete Encyclopedia of Formula One.

Bruce considers his favourite place to be Goodwood, West Sussex, where he is the announcer at the annual Festival of Speed, and he has a regular commission at the Le Mans 24 Hour sportscar race. He lives near Shaftesbury in Dorset.

Roy Thomas worked for Marvel Comics between 1965 and 1980, during which time he served as writer, editor and editor-in-chief.

Having co-written two films, contributed to a number of books and co-authored one with Stan Lee, Roy is truly an expert on all things Marvel.