From Cape Town with Love (with embedded videos)

by Steven Barnes, Blair Underwood and Tananarive Due

THE AWARD-WINNING AUTHORS OF CASANEGRA AND IN THE NIGHT OF THE HEAT TEAM UP FOR A THIRD TIME TO PRESENT FROM CAPE TOWN WITH LOVE, A TENNYSON HARDWICK NOVEL.

Actor-turned-detective Tennyson Hardwick has solved two high-profile deaths in Hollywood, but nothing has prepared him for a race to save a child’s life.

Tennyson’s past in the sex game cost him his new girlfriend, and he brings her to Cape Town, South Africa—a scenic film destination and playground for the rich—to try to win her back. There Tennyson is hired as a bodyguard by superstar Sofia Maitlin when she visits an orphanage to adopt an African child.

But the party is over before it begins. When Nandi’s birthday goes dreadfully wrong, it’s up to a guilt-ridden Tennyson to save a child’s life and reunite a Hollywood family.

But how? He can’t go to the police, the FBI has threatened to arrest him, and Big Brother is monitoring his telephone calls.

To find Nandi, Tennyson will have to rely on tips from his father—a retired LAPD captain—and a mysterious woman from his past, Marsha, who has already proven she can’t be trusted. His strongest lead is a deadly knife fighter known only as Spider.

When his search for the missing child crosses Marsha’s covert investigation into a criminal gang with ties to South Africa, Tennyson knows that finding Nandi might cost him his freedom—or his life.

From Cape Town with Love Trailer

Be the first to review From Cape Town with Love (with embedded videos). 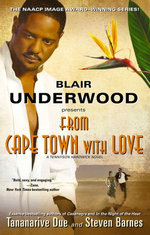 From Cape Town with Love (with embedded videos)

by Steven Barnes, Blair Underwood and Tananarive Due