Fury took Angelina because of revenge, but the longer she’s with him the more he wants her. He never thought he would be the man to use a woman as leverage, but when that woman is the daughter of the notorious Sal Cardona, a man that hurt his MC, Fury will go to any length.

Angelina Cardona ran from her mafia family just a few months ago, but she’s never felt safe since then. When she wakes up after being drugged and taken from her home, she fears her father and his men have found her. But something dark rises inside of her when she sees the man that’s taken her is the Bleeding Mayhem President, Fury. She wants him, even if he won’t let her go, and even if he's is just as dangerous as the mob.

Fury knows he’s in deep where it concerns Angelina, and he won’t let her walk away when it’s all said and done.

Be the first to review Fury. 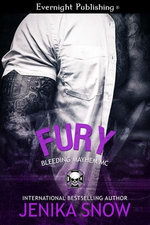