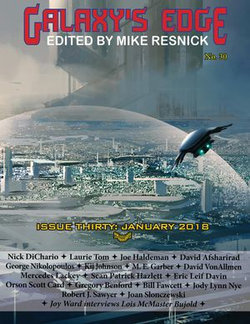 Galaxy’s Edge is a Hugo-nominated bi-monthly magazine published by Phoenix Pick, the science fiction and fantasy imprint of Arc Manor, an award winning independent press based in Maryland. Each issue of the magazine has a mix of new and old stories, a serialization of a novel, columns by Robert J. Sawyer and Gregory Benford, book recommendations by Bill Fawcett and Jody Lynn Nye and an interview conducted by Joy Ward.

Mercedes Lackey is the New York Times bestselling American fantasy author behind the Heralds of Valdemar series, The Elemental Masters series, the 100 Kingdoms series, and many more.

She has published over 100 novels in under 25 years.

Orson Scott Card is the author of the novels Ender's Game, Ender's Shadow, and Speaker for the Dead, which are widely read by adults and younger readers, and are increasingly used in schools.

Card was born in Washington and grew up in California, Arizona, and Utah. He served a mission for the LDS Church in Brazil in the early 1970s. Besides his writing, he teaches occasional classes and workshops and directs plays. He recently began a longterm position as a professor of writing and literature at Southern Virginia University.

Be the first to review Galaxy’s Edge Magazine: Issue 30. 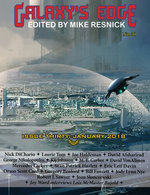