by Michael Swanwick, Robert Silverberg,  Todd McCaffrey and others

Galaxy's Edge is a bi-monthly magazine published by Phoenix Pick, the science fiction and fantasy imprint of Arc Manor, an award winning independent press based in Maryland. Each issue of the magazine has a mix of new and old stories, a serialization of a novel, columns by Robert J. Sawyer and Gregory Benford, book recommendations by Richard Chwydyk and an interview conducted by Joy Ward.

Robert Silverberg has been a professional writer since 1955, widely known for his science fiction and fantasy stories. He is a many-time winner of the Hugo and Nebula awards, was named to the Science Fiction Hall of Fame in 1999, and in 2004 was designated as a Grand Master by the Science Fiction Writers of America.

His books and stories have been translated into forty languages. Among his best known titles are Nightwings, Dying Inside, The Book Of Skulls, and the three volumes of the Majipoor Cycle: Lord Valentine's Castle, Majipoor Chronicles and Valentine Pontifex.

His collected short stories, covering nearly sixty years of work, are being published in nine volumes by SF Gateway and Subterranean Press. His most recent book is Tales Of Majipoor (2013), a new collection of stories set on the giant world made famous in Lord Valentine's Castle.

He and his wife Karen and an assorted population of cats, live in the San Francisco Bay Area in a sprawling house surrounded by exotic plants.

Be the first to review Galaxy’s Edge Magazine: Issue 38. 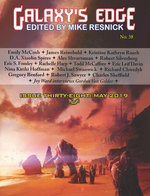 by Michael Swanwick, Robert Silverberg,  Todd McCaffrey and others