George Clooney: An Actor Looking for a Role

It can be said that George Clooney has crafted his artistic brand through a mixture of smart career choices of roles, carefully nuanced performances, and key relationships with directors. He is not just an accomplished actor but a major Hollywood player, serving as director, producer, and writer on many projects. His work garners critical acclaim, and his influence and creative input have been the main reason why some of his films exist at all. This fascinating book analyzes the impressive career trajectory of one of the industry's most powerful figures today.

George Clooney: An Actor Looking for a Role is the first book to examine the full range of Clooney's career. Arranged by genre, sections include early television work, romantic comedies, action films, heist movies, political thrillers, and films that blend a number of different genres. Clooney's contributions have not only resulted in three Oscar acting nominations and one win, but his work continues to challenge the conventions of the traditional form and expands the definition of key genres.

Be the first to review George Clooney: An Actor Looking for a Role. 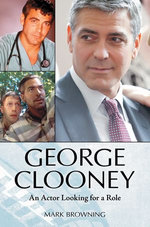 George Clooney: An Actor Looking for a Role

Films Popular culture
Hold on while we process your request.