George Clooney: From Bachelor to Betrothed

Isn’t it strange that George Clooney, a handsome, charming, funny, rich, successful superstar has been a bachelor for most of his life? What is behind this man who, despite a string of intense romances with a number of beautiful women, has never maintained a romantic relationship beyond a few years? He is unquestionably irresistible to a wide range of women – so why didn’t he find a Mrs Right or if he did, why didn’t they stay together? And why at the age of 52, after dating her for little over 6 months, did he finally feel able to commit to Amal Alamuddin? Is it because he was so wedded to his work? Is it because he never found someone important enough to make a real commitment, involving sacrifice and compromise? Is it because he could not let down his guard enough to be part of a couple? Or is it due to something else? Humans, like many in the animal kingdom, are generally hard-wired to search out and make a long-term commitment to a partner. Cleverly designed by nature, as part of the date, mate, and parent paradigm, this tries to ensure we stick together as long as possible to breed and raise offspring, thus increasing the chance of the survival of our species. Irrespective of whether we have (or do not have) children, humans the world-over commit to a significant other for the long-term with prolonged voluntary ‘singleness’ being unusual. Despite this ‘norm’, George Clooney has been single almost all his life (with a brief previous marriage, which one could say doesn’t really count, given its blink-of-an-eye duration and his relative youth and seeming impulsiveness at the time). Why might he have been different to the norm? – Maybe he just didn’t want a long-term partner, some suggest he is gay, maybe it’s something about him, maybe it’s something about the women he has dated in the past, or maybe it’s just due to circumstances. This book is not a biography of George Clooney – his life has already been chronicled in many publications by others and if all the online information on his professional and personal life were to be printed, one wonders if there would be many trees left in the world. Instead this book looks at possible reasons why this Hollywood superstar has chosen to be a perennial bachelor until now. The first chapters cover what we know about ‘The Man’, and what we know about the ‘Women Past’, looking at differences between the ‘camps’ of women he dated before and after he became the superstar he is today. It explores why they fell in love, what dating George Clooney might have been like in reality, and examines possible reasons why the relationships didn’t last. Was it because of circumstances (did they get entangled too fast; were they under too much scrutiny; could he actually meet the right ones)? Or could it have been something about the women he chose to date, particularly since becoming famous (did they find they were too different to him; did they feel too inferior; did they feel too replaceable; did they expect it to end; or did they just need more commitment)? Or was it something about The Man himself (could ‘The Achiever’ be a bit of a Mr Overachiever? Is ‘The Playboy’ just a Mr Fairweather? Might ‘The Humanitarian’ be a Mr Perfectionist at heart? Is ‘The Loyal Friend’ actually a Mr Self-Protector? Behind ‘The Down-To-Earth Guy’ is there a Mr Self-Doubter? Is ‘The Man’s Man’ a part of avoiding commitment and being a Mr No-Ties? Is ‘The Ringleader’ fundamentally a Mr Controller? Or is ‘The Joker’ deep down still a bit of a Mr Schoolboy?). And what does all this mean for the future, now that he has made a commitment to Amal Alamuddin, an accomplished human rights lawyer who seems to have much more in common with him than many who came and went before? In the last chapters the book looks at what any of us need for long-term successful partnerships, finishing with ‘An all-purpose recipe for long-term romantic success’ (of course no recipe is guaranteed but a good one certainly helps).

Be the first to review George Clooney: From Bachelor to Betrothed. 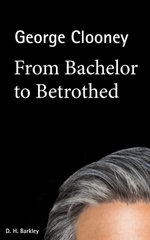 George Clooney: From Bachelor to Betrothed