After running from an abusive relationship, Zoey tries to regain control of her life in a new town. She begins to find reasons to move forward, but Zoey can't ignore her arousal for a dark and mysterious man—one that is clearly dangerous.

The moment Sergei sees Zoey, he wants her. She's vulnerable and timid, but she has a strength behind her eyes. Zoey's a fighter, a warrior, and he wants her for more than just a night in his bed. But how will she react when she finds out he’s part of the Bratva—the Russian Mafia?

Zoey knows who and what Sergei is, and even though she should be terrified, she can’t help but be drawn to him. It isn’t until her past comes back to haunt her that she truly sees the type of man Sergei is, and the lengths he’ll go to protect her.

Be the first to review Give Me More. 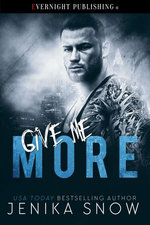