Harbinger of the Storm

The second book in the critically acclaimed Obsidian and Blood trilogy:

The year is Two House, and the Emperor of the Mexica has just died. The protections he afforded the Empire are crumbling, and the way lies wide open to the flesh-eating star-demons--and to the return of their creator, a malevolent goddess only held in check by the War God's power.

The council should convene to choose a new Emperor, but they are too busy plotting against each other. And then someone starts summoning star-demons within the palace, to kill councilmen...

Acatl, High Priest of the Dead, must find the culprit before everything is torn apart.

‘Political intrigue and rivalry among a complex pantheon of divinities drive this well-paced murder mystery set at the height of the Aztec Empire in the late 15th century. De Bodard reintroduces the series hero Acatl, high priest of the dead, immediately following the death of the Tenochtitlan leader. One of the council members in charge of choosing a successor has been brutally murdered in what looks like an attempt to influence the decision. But the deaths continue and the political situation grows more complex, while the empire looks to be increasingly at risk of invasion by malignant powers. Acatl must go face-to-face with the most powerful god in his world and put the good of the empire above his antipathy for is rivals to achieve the uneasy succession. De Bodard incorporates historical fact with great ease and manages the rare feat of explaining complex culture and political system without lecturing or boring the reader.’ —Publishers Weekly

‘Another thing that intrigues me here is the whole fact that historically we know that the real empire died out mysteriously and completely and as such there is always that thought in the back of my mind that the author could choose to bring about the end of days. That highlighted sense of possible doom is something that is missing from too many novels. The way the story is told in this book is very impressive, the plot is both mature and seductive, twisting and turning like a weather vane in a force 9 gale while the action is both bloodthirsty and imaginative. The world building is fantastic and we get to learn even more of this rich culture and the many gods and creatures of the dark. I really can’t fault this book at all and recommend it to one and all but if you haven’t yet read Servant of the Underworld I suggest that you get them both and read them in order, you won’t be disappointed.’ —SF Book Reviews

‘Bodard’s writing is polished and striking, as she convincingly fills in the colorful elements of the Aztec culture–even if those colors tend to be of blood and bile as well as flowers and hummingbirds… beautiful, grimy, breathtaking, and morbid. 5*’ —Examiner

‘Aliette de Bodard has done it again. Harbinger of the Storm is an action packed Aztec mystery opera with magic, interventions from the gods and more twists and turns than the first book. It even has a love story with amusing snippets here and there… The story is self contained and can be enjoyed standalone, but you will not want to miss out on the first. I wish it was 2012 already even if the world is going under while I read the final Obsidian & Blood.’ —Cybermage

Be the first to review Harbinger of the Storm. 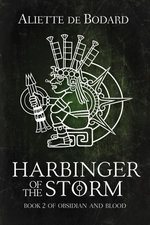 Harbinger of the Storm