Corbin has been called many things: cocky, dirty, a manwhore. And he never denied any of them. He likes women, all shapes and sizes. But the one girl he wants, the one he's known for a decade, and the most genuine person he knows, is his sister's friend. Being with her would cross a line.

In the past Izabella has watched Corbin go through women like they were flavors of ice cream. And despite that she still wants him, but compared to the women he goes after she's as plain as they come.

But when she's stranded at a bar, she finds herself seeking out Corbin's help. Maybe it's the liquid courage, but she's not going to stop herself from being with him, not when he clearly wants her, as well.

The only problem is what will happen once morning comes?

Be the first to review Hard. 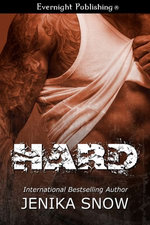