Since its first publication in 1982, Blanche d'Alpuget's Robert J Hawke: A Biography has remained the benchmark by which other political biographies are measured. Hawke: The Prime Minister begins as Bob Hawke wrestles the Labor leadership from Bill Hayden and a few weeks later wins the 1983 federal election, thus achieving his life's goal of becoming Prime Minister of Australia. With a novelist's eye, a political scientist's acumen and based on exhaustive research and interviews, d'Alpuget brings to life ministers, political advisers and previously invisible but powerful mandarins, and their byzantine struggles. Here are leaders with vision and ideals, but prey to ego, ambition and human frailties-yet all committed to reforming a country and an economy that, at the time Hawke took over, was heading towards becoming 'the poor white trash of Asia'. Throughout the struggles inside his government, with the opposition and with an electorate that yearned for reform but hated its pain, Hawke maintained his vision for the country. With four consecutive terms in office he changed Australia irrevocably.d'Alpuget's analysis of how power is deployed, and how elections are won, is nothing less than epic, rich with intrigue and drama. In Hawke: The Prime Minister, she has produced a portrait of a remarkable political leader, determined to steer his country through the international forces pounding down on its economy and the ever-present but imperceptible dangers of the Cold War. It explores the role he played in the precarious game of international politics in the last days the Cold War, and at the awakening of the sleeping giant, China. Unknown until now, the book also reveals Hawke's involvement in international reconciliation, recovery and reconstruction-the 'Three Rs' he set out to deliver to Australia in 1983. Hawke: The Prime Minister is a meticulous portrait of a wily, brilliant politician, uncompromisingly ambitious and at the height of his political powers.

Be the first to review Hawke: The Prime Minister. 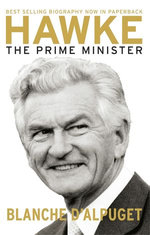