by Stefan Petrucha and Allen Gladfelter

HOTEL TRANSYLVANIA is under attack--the owner of the nearby Kakieland theme park, the notorious Stephen Cling, has launch a viral anti-monster smear campaign claiming that monsters are scary! That keeps guests away from HOTEL TRANSYLVANIA and threatens the existence of the monsters' beloved refuge. Drac, Frank, Murray, Wayne, Griffin, Blobby, as well as Mavis, Johnny, Dennis, and Winnie, must find a way to win back the public's trust and save HOTEL TRANSYLVANIA or else they'll be forced to return to the Bad Old Days when monsters were feared and shunned.

Allen Gladfelter wanted to draw comics when he was a kid. Now he's a grown-up and he draws comics. Some would call that success.

So far, Allen has drawn comics for Disney, Pixar, Dreamworks, Sony and quite a few other cool companies; and also done some concept art and character design for mobile game and cartoon animation studios.

Allen is also an art teacher and a frequent art student at his local University. His favorite things to draw are fast cars, old buildings, pretty ladies and cool dudes. He prefers to draw by hand, the old fashioned way.

Be the first to review Hotel Transylvania Graphic Novel Vol. 1. 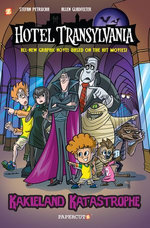 by Stefan Petrucha and Allen Gladfelter