How it Works: The Sister

by Joel Morris and Jason Hazeley

The PERFECT STOCKING FILLER for anyone who has been having the same argument since 2001 or who no longer has ANY of their own clothes left, i.e. someone who is, or has ever been a sister.

'This is a sister.

Wherever you go, whatever you do, a sister will always be there.

Which can get really annoying.'

'Over the years, Gareth has bought his sister Kelly every possible birthday present he can find related to the film he remembers her enjoying in 1989.

Kelly has had to come to terms with the idea that though they spent half their lives together, Gareth was not really paying attention for most of it.'

This delightful book is the latest in the series of Ladybird books which have been specially planned to help grown-ups with the world about them.

The large clear script, the careful choice of words, the frequent repetition and the thoughtful matching of text with pictures all enable grown-ups to think they have taught themselves to cope. Featuring original Ladybird artwork alongside brilliantly funny, brand new text.

Joel Morris is the co-writer of The Framley Examiner and the best-selling Bollocks to Alton Towers.

Along with Jason Hazeley, he has written for a frankly stupid number of radio and TV comedy shows including Charlie Brooker's Screenwipe.

He divides his time between London and the pub.

Jason Hazeley is the co-writer of The Framley Examiner and the best-selling Bollocks to Alton Towers.

Along with Joel Morris, he has written for a frankly stupid number of radio and TV comedy shows including Charlie Brooker's Screenwipe.

He divides his time between London and the pub.

Be the first to review How it Works: The Sister. 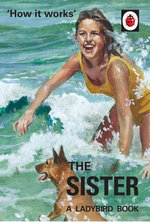 How it Works: The Sister

by Joel Morris and Jason Hazeley